MidEast Cut offers an investigation of the cognitive, cultural, social and political ‘space’ of alternative / experimental short film, documentary and video from and about the Middle East, Iran and Turkey.

Background
During 2005-2007 CPS launched a series of international film festivals such as Made in Video, Coding-Decoding, Not on Satellite, Sightseeing Lebanon, From the Middle East with Love, and the Middle East Video Channel, which took place in Scandinavia, South Europe and East Asia. All festivals were related to the Middle East. After the experience and success with these, CPS launched another festival in 2009 with a new concept and on a larger scale of internationalism called MidEast Cut. 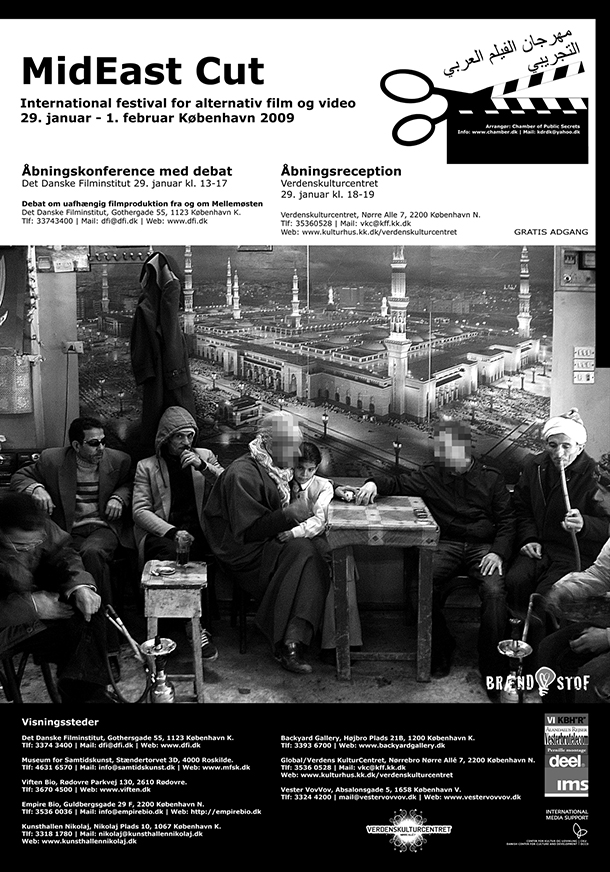 Concept
During the last 20-30 years there has been a remarkable interaction in audiovisual culture between cinema, video, photography, animation, computer graphics, etc. As a result, margins are redrawn and ultimately abolished, trends and genres are integrated into one another, and a variety of technologies and methods are used within one framework. One of the most popular expressions of this cross-media art is video and film making, which has won its autonomous position after having operated on the margins of the art society for decades.

A current and popular development within alternative film stems from recent geo-political events around the world. These have led to widened awareness and resulted in independent electronic art produced mainly by film and video makers who have made the widespread usage of the (video) camera into a visual statement and an alternative to the information flow of mainstream media.
It is an inventive force, which entails new uses of video and digital photography that revolutionize the human visual experience. The result is strong, artistic productions that tend to interact with the surroundings and commit themselves to complex contemporary political and socio-cultural issues. It also entails a new aesthetic, which is still finding its own vocabulary and rules of engagement with which to capture the attention of audiences, critics and experts worldwide.

Regardless of the booming popularity of this media among film makers, little is known about this alternative practice within film and video documentary. Audiences in the West as well as in the Arab world, Iran and Turkey have only recently begun to be exposed to this new genre and a great number of such analytical and independent productions do not reach the general public.
Some of the most interesting productions are to be found in films of autobiographical nature and testimonial interviews of independent, investigational and educational nature. This includes issues like gender, identity, history and memory. It is our intention to articulate the aesthetic context of this type of alternative film making, explore its characteristics and scope, and display it to local and regional audiences.

Seminar
Parallel with the opening of the festival, a one day seminar was held. For the seminar, prominent speakers was invited to talk about the role of alternative media and independent film production in contemporary film practices. The seminar was a gathering of artists, film and video makers as well as curators from around the world. Expert filmmakers, critics and aestheticians were also invited to talk at the event.

The seminar took place at the Film Institute in Copenhagen and examined “the usage and influence of audio-visual media in the Middle East and world wide”. The seminar also included panel discussions on mainstream media making, independent film production, internet film activism and the effect of new media on the culture industry in the West as well as in the Arab world, Iran and Turkey.

Open Call
The festival accepted submissions by independent, experimental film makers who provide insightful and innovative perspectives on world-issues of socio-political, historical and cultural nature related to the Middle East, Iran and Turkey. This way, the festival became a platform for alternative film made by documentary makers, producers of experimental short film and animation, and artists who work with the Arab world, Iran and Turkey as a subject matter.

Submitted works had to fit into one of the following categories: