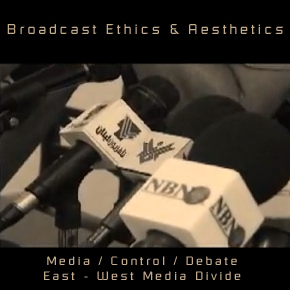 This category highlights events and statements that question the ethics and aesthetics of Arab and Western media and the way the two portrait each other. The rough-cut footage speaks for itself and although the content is real, the project Al-Manar First – Al-Jazeera Next? is still in progress and should mainly be regarded as information and inspiration for continued reflection.

Broadcast Aesthetics I: The banning of a TV station that started the investigative project.

Broadcast Aesthetics II: The reaction of the media and its spokesmen.

Broadcast Aesthetics III: The game of labeling ‘the other’.