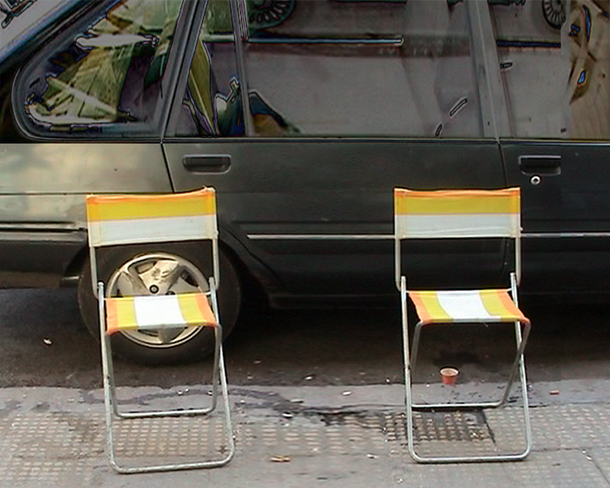 On class ideology, power and democracy

Chairs to Share is a private/public video art project motivated by the Canadian play Ten Chairs Share the Wealth. The play is a participatory performance that dramatizes the growing disproportion between the very rich and everyone else.

Chairs to Share portrays a statistical truth of the increasingly unequal distribution of wealth and power between the working class/poor and the illuminati in any contemporary society. What Chairs to Share is all about is the structures and social classes that are both the cause and the result of economic inequality. Class analysis is about naming the structures that support our economic system, and seeing our broad role and place within them.

Which chairs to sit on? People find many ways to sit on their chairs. Some people feel uncomfortable sitting in a stranger´s place, while for others it´s a joy. For non-illuminatis any chair will do, although the best chairs are sturdy, narrow, easy to move, and have no arms. The non-illuminatis would prefer all chairs having the same shape and colour. For illuminatis the best chairs are black and comfortable and they find it interesting to have an odd assortment of chairs. In either case, everyone end up having their OWN chair. Who is setting up the chairs?

Chairs to Share is not a straightforward visual criticism/stimulation. Its sociological message goes beyond visual experience. It touches upon a problematic topic in a society that struggles for egalitarianism and against dissimilarity. In the streets of Beirut, inquisitive chair owners demand that we reveal the motive behind our filming (Why are you filming a chair? What´s your TV station? When can we see the program?). The shooting process is prolonged by invitations for tea/coffee or – barreed – a cold drink.

Social and political conversations have accompanied the filming each time we approached a public chair. Abu Ali´s chair at Hayul-Leega, Abu Adnana´s chair at Bachoora – all has a story to tell. At Cafe Musaytbh we were told the narrative behind a historic chair belonging to the former Lebanese Parliament President Kemel Al-Assad. The chair still carries his legacy and the spot where he used to place his chair is still referred to by visitors as Kemel Baak´s spot.

People were aware of the metaphors related to the chair filming, in particular public chairs in the streets of a town like Beirut. Inspiring commentaries regarding class conflict, chair war, political ideology and social struggle were reflecting the patterns in people´s consciousness.

A community supposed to perform as one body

Handmade seating objects, seats or chairs are one of Beirut´s several extraordinary street furniture phenomena. This private/public phenomenon contains numerous old, new, shabby and self-constructed seats. On every edge of the middle class zones, the inhabitants of Beirut have scattered thousands of private seating objects and chairs as a relaxing solution to an urban problem. Town planners and urban authorities have played a minimal role in refurnishing the city´s deprived zones in post-war Lebanon. Urbanizing man has turned Beirut´s street furniture into a phenomenon, which has now become an aesthetical problem. Beirut´s middle class/poor zones are not the focal point of developers and town planners in post-war Lebanon. Reconstruction efforts have concentrated on a few square kilometres within the boundary of Beirut Central District, with economic prosperity as a priority.