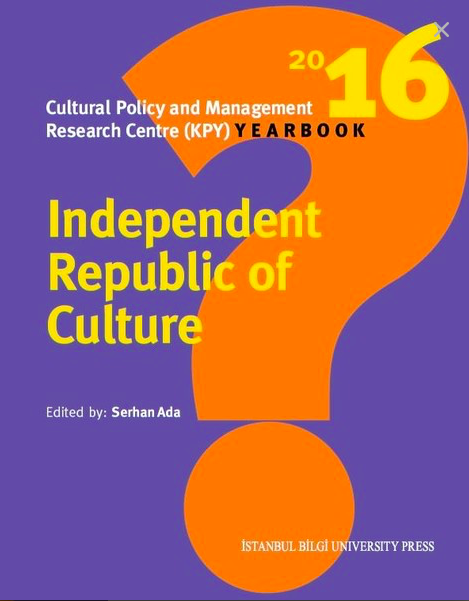 Khaled Ramadan and Dorian Batycka have contributed with the article ”The Panache of Artivism within the Imperial Narrative of the Middle East”.

“Focus” contains research covering different aspects of this theme. Serhan Ada discusses the possibility of an independent republic of culture, the main theme of this edition.

Katja Praznik and BFAMFAPhD’s work focuses on the challenges of the working conditions for artists due to the political and institutional changes in the appraisal of artistic labor.

In MTL Collective’s piece, supported by examples of their research activities, which have created a global impact, we can see how precarity has not only become an objective situation deeply affecting those working in the artistic field, but also one affecting laborers working with their hands throughout all the investments made by artistic institutions, schools and museums. Friederike Landau’s piece is an analysis looking at a cultural policy based on alternative practices developed in Berlin. Fatin Farhat and Dounia Benslimane debate the leading role that can be played by civil society and its representatives in the formation and implementation of cultural policy through examples taken from Palestine and Morocco respectively. Yeşim Tonga Uriarte focuses on the change that independent (and private) theatres in Turkey have gone through in recent years and their problems in terms of institutional sustainability. Ian Alan Paul’s piece on the Guantanamo Camp Museum presents us with the theoretical premises of a new conceptually distinct understanding of the museum based on the concepts of in/justice. Sohrab Mahdavi, meanwhile, questions the present position of art through the artistic environmental activism project Nafas in Tehran. Vladan Jeremic and Corina Apostol focus on possibilities of struggle for labor rights and emancipation in the field of art.

There are also pieces on various different topics in the “Open Space”. Khaled Ramadan and Dorian Batycka look at the art of Middle East, especially visual arts, from the perspective of the timing and forms of post-colonial developments and debates on the world art scene. Rebeca Maseda Garcia discusses changes in the cinematic arts and industry in Spain during the Franco era and afterwards from a critical perspective. Marcus Graf evaluates present-day art criticism, while Emre Zeytinoğlu scrutinizes Shakespeare’s The Merchant of Venice as a “case study” of discrimination.

In the “Reviews” section, we find Christopher Gordon’s important critique of the dangers posed by the policies of the Conservative government in its latest “White Paper” published in Britain. Funda Lena draws attention to the essentials of a collective book published on the occasion of the tenth anniversary of the UNESCO Convention on the Protection and Promotion of the Diversity of Cultural Expressions (2005). L’Internationale’s text is a comment on Turkey’s withdrawal from the EU Creative Europe Program. Osman Erden, Özlem Karakuş and Hacer Foggo’s pieces are contributions on subjects of identity and minorities in Turkey through perspectives stretching from art history to current politics. Derya Nüket Özer and Evrim Töre’s evaluations are on cinema. Özer makes deductions about an urban problem/project in Istanbul after carrying out a reading of a monographic film, while Töre draws attention to recent consolidation in the direction of a monopoly of distribution in the Turkish film sector and to the negative effects this could have upon cultural diversity. Finally Yiğit Ozar considers the serious threat to cultural and historical heritage areas through status changes leading to construction through recent examples.