HUMAN ENCYCLOPEDIA OF THE MALDIVES

The Maldives Pavilion promotes a human encyclopedism which has no equal in this Biennale and will be the guideline for the years to come. It deserves to win the Golden Lion for the best curatorial methodology. 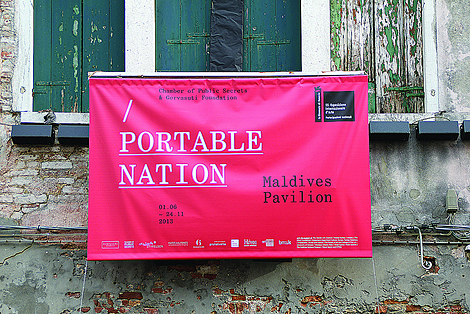 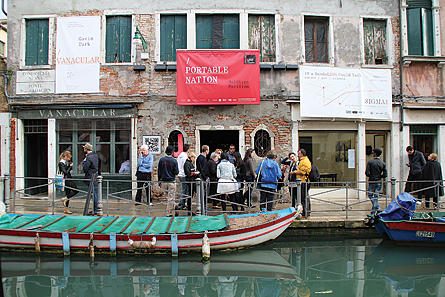 If the collection and encyclopedic content in the premises of the 55th Biennial could induce different approaches, we will say that in the face of those who have voted in a self-congratulatory narrative, so in some way to a closing (UK, Argentina), there are those who have tried to listen to the genius loci, dramatizing the breakdown of the spatial constraints of the pavilion (USA, Spain) and who, in a stunning and almost total solitude, has favored the line –  curatorial aesthetic of total openness to the world.

The Maldives Pavilion is at the head of this small number of national representatives, despite – or perhaps because of – its debut as a presence at the Biennale.

It is not the world’s poor who stand in line to beg for attention and trade agreements, grants, loans, etc. – or even the victims most affected by climate changes, as induced mainly by the West – who expose their drama in front of the guilty. Instead it is a philosophy rooted in the depths of Eastern cultures that – despite colonization at different levels, not least tourism (the first tsunami that flooded the Maldivian archipelago went to seasonal visitors) – declare a fierce desire for dialogue.

It is true that we are talking mainly of Climate Change, but those in charge of the pavilion, curators and artists, confront reality in terms of global scientific synergies as a last resort against the erosion of the planet, not only against the (dreaded) disappearance of Tuvalu and the Maldives.

Only 2 of 17 artists are Maldivian and the approach to the subject is absolutely diverse. The “ecological romanticism” of the title, then, refers to the role of Nature as the first option of life of a people and an alternative to the culture, which calls itself the space maker, while the eco-system would not let one take off. Nature as a ‘matrix’ aesthetics means that giving priority to the observation of beauty is not perfectible, engaging a look at these more analytical scientific methods, ranging from development of Strategies and Tactics of Survival to the study of quantum physics, in a framework of collaborations and exchanges that starts from here and comes to America, Middle East, Europe and Australia, or areas of the world that have provided the works exhibited in the pavilion.

It promotes a human encyclopedism – artists, invited countries, all involved in the production phase – which has no equal in this Biennale and will be the guideline for the years to come. “Sound of Illusion” is one of the self-definitions chosen by part of the curatorial team (Camilla Boemio / Alfredo Cramerotti), but there is the distinct possibility that this is the only method to make and tell the Arts in the near future.

Another example, intellectuals and scientists from Australia, India and the United States will participate in symposia, short talks or exhibitions for the duration of the Biennale. Just for that, as well as for the charm of the pavilion, the Foundation Gervasuti, it is expected to win the ‘Golden Lion’ for the best curatorial methodology.

The works on display, all characterized by a need for attention and scientific investigation, favor video art and the ‘complex installation’, sometimes including video / magazine clippings / photographs, to confirm the desire for documents and information, even in the absence of the notion of what can be called “the history of the Maldives”, made not only for tourism or environmental drama, but also for humanitarian issues, feminicide and violated rights.

We look with pleasure at the video-documentaries of Christoph Draeger and Heidrun Holzfeind (“Tsunami Architecture – The Maldives Chapter Redux”) and Khaled Ramadan (“Maldives To Be or Not”), while it is inevitable that the block of ice – and the beautiful movie – of Stefano Cagol collects a more “iconic” attention, but not necessarily more participatory. Another Italian presence is Paolo Travagli with significant visual multiplications obtained through the use of mirrors. Other significant contributions also came from Oliver Ressler (“A Completely Different Climate”) and Ursula Biemann (“Deep Water”).