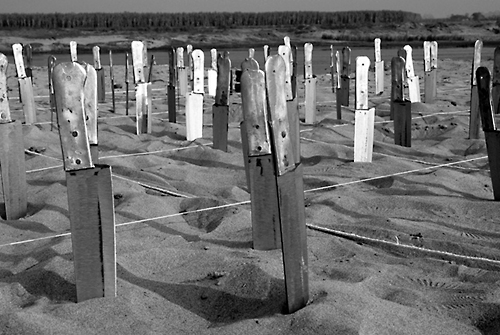 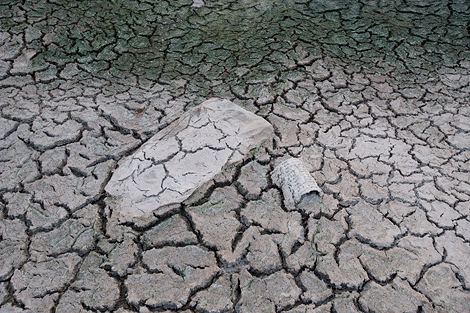 Camilla Boemio: You are an artist, a writer and an environmentalist. Your work includes photography, video, installation and public art. You have also produced a successful photo book, Down and Out, labouring under globalization (OUP, 2000). Can you tell about it and your background?

Ravi Agarwal: It all began with my first camera when I was 12 years old. Ever since it has been a constant discovery of a personalised world. I became an engineer, an entrepreneur, an activist along the way, and in many ways my search was driven by the world I could only see through my camera. We seem to have lost our sense of mortality, frailness and interdependency. My camera produced an order and a retreat which was only mine.

I think curiosity, passion, aesthetics find their own forms. Art brought them all together for me I tried public art, video, and continue to attempt new ways. Down and out, the book,  was an invitation by an academic to collaborate with him on the project. It helped me understand both issues of power and representation in photography, but also about the dignity and humility of those people who power India’s economy from the ground up, the poor, migrant workers. It was about the politics of migration, but was also a personal journey in documenting ‘others.’

CB: Can you tell about your personal ecologies?

RA: Increasingly I saw my work as being reflective of my subjectivity. For example, it was less a photograph of something outside, a ‘truth’ but rather my subjectivity about it. My work became more self reflexive. In many of the works, such as “Extinction?” or “Ecology of Desire” series, I try and explore my encounter with these ideas. They are not told as larger narratives, but personal stories and questions which could have meaning for others.

CB: How do we know nature?
I’m thinking of The Sewage Pond’s Memoir, your film show during the After the Crash group show of the Orto Botanico Museum (part of the ISWA European Project) .

RA: The video deals with the idea that all in nature as we have made it, is not what it seems. It is being destroyed even if it seems it is still intact, and while we thing we can preserve it, we are actually causing its destruction. New technological projects like urban centres, cities distance us from precious life giving resources, and numb us into a feeling of false safety.

I feel we seem to have reduced nature to mean a few things such as a resource, a place to conquer, or even a landscape to be appreciated.  However, even if  we do not accept it, we live in a very complex relationship to the world outside of ourselves. We try and analyse this in linear ways, but it always confounds us. When we think of happiness, somewhere nature, is  part of it. I think it is time we accept again that we have only scraped the surface of our relationship with the universe, and that we live in it beyond our understanding of it.

CB: Bruno Latour, the science philosopher challenges this divide, and calls for the co-evolution of the idea of nature through a collective of science and society. Can you tell me about him?

RA: Latour is very important since he re-questions our reduced idea of nature and brings out the complex ways we form ideas of it. Along with Tim Morrison he also questions the category of ‘nature’ itself. He brings in a new discourse about objects and nature, which helps open up the question of ‘nature’ once more.

CB: We are in a dysfunctional system – offshore economies/ecological crisis – are we witnessing the decline of Western democratic capitalism?

RA: We have entered a new world where we have reaffirmed our faith in economic and financial markets as the key to the future. We always have had them, but always they have been balanced along with other ideas of equity, justice, spirituality, humanness, collectiveness. Somehow at the moment these have been erased, and the new economy had become central to our futures. The Western model of development has been internalised by the new developing nations. The promise of this can be different than what has already happened in the western world.  We have the ‘new west’ in the east now. It is a continuation of the past, only the terrain has shifted. We need to find new forms, a new politics – only the artist can lead the way.

In my artistic practice I try and think of and locate myself in these questions. For example the work Have you seen the flowers on the river takes about local sustainability in a globalising city.

CB: How will climate change alter our life?

RA: We cannot even understand all its dimensions. We know certain things like changing weather, melting polar ice caps, new extinctions etc. Our human world exists in a fine ecological temperature niche, it defines our energy exchanges, our species distribution, our climate, our agriculture – everything we know, is defined in that ecological niche. Change that niche – we move the land under our feet – everything will change!

CB: A world in change may be an archive of global desires and perceived threats – what do you think?

RA: In ways these ideas also drive my work. The fear of loss, pain, death. It is the primordial fear of being mortal. I feel the archive is a trunk full of fear. When we overcome it – can we still live? The world changes, but fear remains constant.