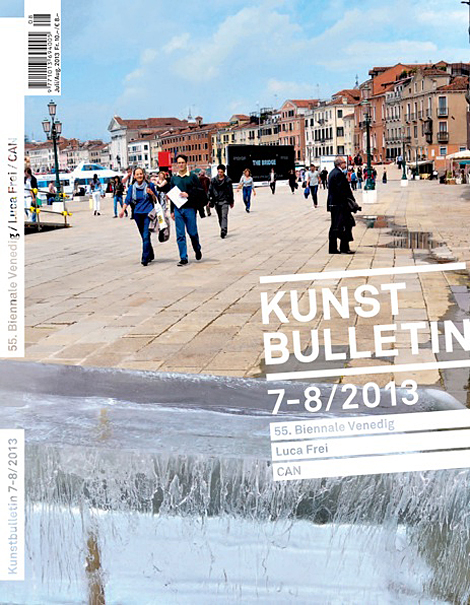 Five authors report on the 55th Venice Biennale. Special attention is given to the ten newcomer among the national pavilions, as the Maldives, that have worked with an international group of artists. This also includes the Italian Stefano Cagol who brought an Icemonolith to the lagoon city and left it melting on Riva Ca’ di Dio, as “kubrickian metaphor questioning the serious process that is affecting the planet.” Cagol who lives in a village in the Alps and is just back from projects in the Arctic, thus commented the melting of eternal ice, and the resulting rising water level that in the coming decades will flood the sensitive areas – especially the archipelago of Maldives, only maximum 2.4 meters above sea level, or Venice itself. Ecological effects of climate change on global water are addressed also by UN, in 2013, the year of the water, noting that “the sustainable management of water resources is one of the biggest challenges of the 21st Century.” Apparently more than 80% of untreated wastewater still falls into the water, which smells directly in some Venetian streets.

Create and destroy is also a central artistic principle. Thus, for example, the reference urges to Francis Alys, the act of pushing an ice block along the streets of Mexico City so long until it was melted. The practice of <Paradox 1 (Sometimes Making Something Leads to nothing)> action, 1997, took nine hours. Cagol’s block of crystal clear glacial ice melted in 72 hours and has long since been absorbed into the green sea algae of the Venetian coast.