A publication by World of Matter edited by Mabe Bethônico

Water. Coltan. Carbon. Oil. Air. Lithium. Fish. Rice. Land. Gold. These raw materials, extensively extracted and harvested today, are of central concern to World of Matter, an international research project, which will be launched as a multi-media web-platform in fall 2013. World of Matter is a collaborative endeavor that brings together artists, architects, and photojournalists who have worked extensively on resources, globalization, and spatial politics, with theorists from the fields of geography, art history and cultural theory.

The book Provisões (Portuguese/English) compiles texts and visual materials produced by the group and several Brazilian guest speakers for its inaugural public symposium in April 2012. Held in Belo Horizonte within the Brazilian mining state of Minas Gerais, a location largely characterized by the massive extraction and export of mineral and agricultural resources, and imbued with a long colonial history of violent human and species displacements, the conference Provisões presented a rich opportunity for World of Matter to engage with audiences about ‘resource ecologies’, both near and afar.

Rather than a polished or conclusive document, Provisões functions as a workbook, conveying the project’s evolution toward the launch of its comprehensive, multi-media web platform, as well as its first mise-en-scène in the exhibition space at HMKV Dortmund, in Germany, both later this year.

In the last sixty years, more natural resources have been raided by humans than in all previous centuries together. Large-scale mining is penetrating ever deeper layers, multinational land grabs are advancing to remote corners, and the race is on for the neocolonial division of the seabed. This frantic rhythm of ‘progress’ has spurred images of crisis and doom while firing up the competitive rush for new frontiers.

With growing consciousness about global environmental limits, there is urgent need for new modes of representation that shift resource-related debates from a market driven domain to open platforms for engaged and decentralized public discourse. First and foremost, the assumption that everything is a potential resource for human consumption must be challenged, as this anthropocentric vision has led directly to countless environmental and social disasters. The book Provisões traces the move from ‘resources’ understood as a system of supply lines for humans toward a deeper attention to the situated materialities of stuff like gold, rice, cotton, and water, as well as the complex, multispecies configurations within which they emerge. It considers a planetary perspective on a world that matters. Focusing on the development of innovative and ethical approaches to renewable and non-renewable resources, World of Matter considers visual source material a crucial tool for education, activism, and public awareness, particularly in light of increasingly privatized commodity chains and the gated power networks that control them. 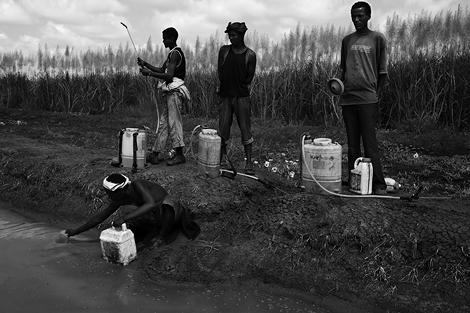 Public talk by Paulo Tavares (World of Matter) on “The Geological Imperative” will be held at the Maldives Pavilion in October 2013.

The video Deep Weather by Ursula Biemann (World of Matter) is part of the exhibition at the Maldives Pavilion.

www.worldofmatter.net will be launched at Argos in Brussels
on October 18, 2013.